See if I can encourage some interaction between you guys and myself.  I’ll throw this nugget out and see who bites.  So, if you have a pretty beefy VMware ESXi server (16GB to 32GB) in your lab you should be able to build a pretty basic XenDesktop lab with a XenDesktop Studio Server, your physical ESXi server providing desktops and a vCenter server.  Yelp that sounds like an environment that would run pretty smoothly on a single host with 16GB to 32GB of RAM.

But what if you are a mere mortal with only a similar setup to mine?  You are running a single workstation running Windows 7 with 8GB of RAM.  Does this preclude me from doing XenDesktop labs?

One of the large challenges for running this lab within a VMware Workstation 8 is having an ESXi server with nested workstations.  It’s one of the practical memory limitations I’ve run into in trying to create this lab.  But remember that XenDesktop has morphed over the years.  One of the “new” features of XenDesktop 5.x was the addition of the Desktop Studio which allows provisioning of VM’s to the supported hypervisor (Hyper-V, XenServer and vSphere).  XenDesktop 5.x still supports a standalone Provisioning Server.

Actually as I’ve engaged folks out in the real world they still architect their XenDesktop 5.x environments with provisioning servers.  The single deployment I did I avoided using a Provisioning Server and used XenDesktop Studio’s sleek integration with vSphere.

You can use this “Legacy” technology to build your lab in VMware Workstation.  The basic components are a Citrix Provisioning Server, XenDesktop Studio (web interface and management) and your workstations. 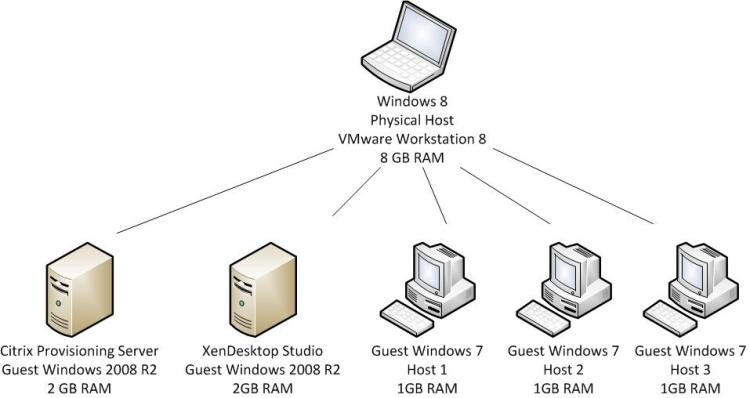 If you want to play around with XenDesktop and get a feel for the technology this isn’t a bad approach.  This is a theoretical lab that I haven’t built.  Let me know the interest level and I’ll actually build it and blog my experience.

Update 06/23/12: I was successfully able to get a work XenDesktop environment working inside of VMWare Workstation 8 running 16GB of RAM.  Post is located here.

Running Xendesktop inside of VMware Workstation