With all the exciting news about vSphere 5.0 and the Windows 8 beta being released over the past couple of week’s one product announcement may have gone unnoticed.  VMware Workstation 8 was released.  For us virtualization geeks this is a big deal.

One of the nice surprises with the release of Workstation 8.0 is the addition of Virtualization of Intel VT-x and AMD-V/RVI.  What does this mean?  Well now you can run a 64-bit nested VM within a virtual instance of vSphere and you can run other bare metal hypervisors such as Hyper-V

I upgraded the hardware of an existing Windows 2008 Server R2 VM I had from Workstation 7 to hardware version 8 and enabled Virtualize Intel VT-x/EPT or AMD-V/RVI and was able to successfully add the Hyper-V role to this server.  To change the hardware version you can right click on the VM and select “Manage” and then “Change Hardware Compatibility”

The big test was to try and run a nested VM within the Hyper-V host.  I was disappointed that it just didn’t work.  Two virtual drivers needed to run Hyper-V services would not start.  Virtual Machine Bus and Virtual Infrastructure Driver both indicated a problem in the device manager of the Hyper-V host.  This made me look to “The Google” where I found an extremely helpful blog post here

Of all the advice on the page the one thing that made the two drivers work were adding the following line to the configuration file for the Hyper-V VM.

Once I added this switch the error code for the two drivers disappeared.  I was then able to boot my nested virtual machine.  I actually got extremely ambitious and decided to install 64-bit Windows 8 as the nested VM. 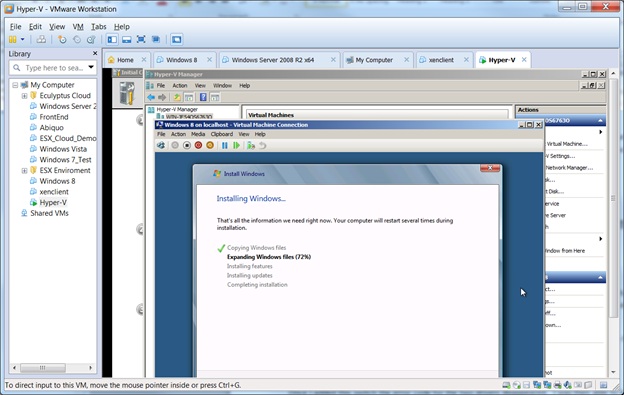 I had given the Hyper-V host a lot of resources – 4GB RAM and 2 CPU’s.  The nested Windows 8 machine had 1 GB of RAM and 1 CPU.  It took about 1 hour to install the Windows 8 VM and it was one of the slowest nested machines I’ve ran to date but it worked.  This is an incredible leap in desktop virtualization technology and will make future labs extremely flexible.  To get an idea of what typical nested performance is like take a look at my post on vSphere performance inside of Workstation 7.  Time to buy more RAM 🙂

Visit my YouTube Channel for more Virtualization and Tech Talk